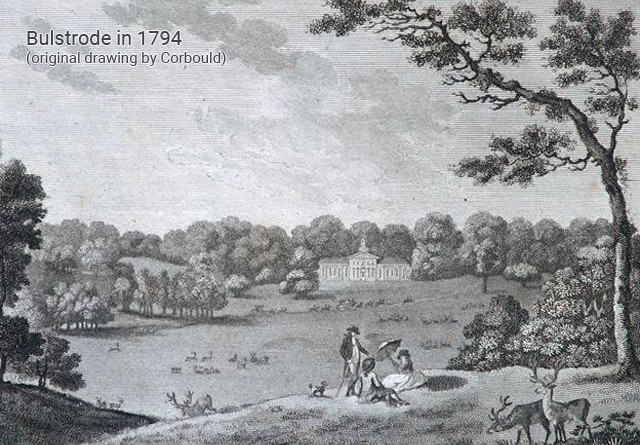 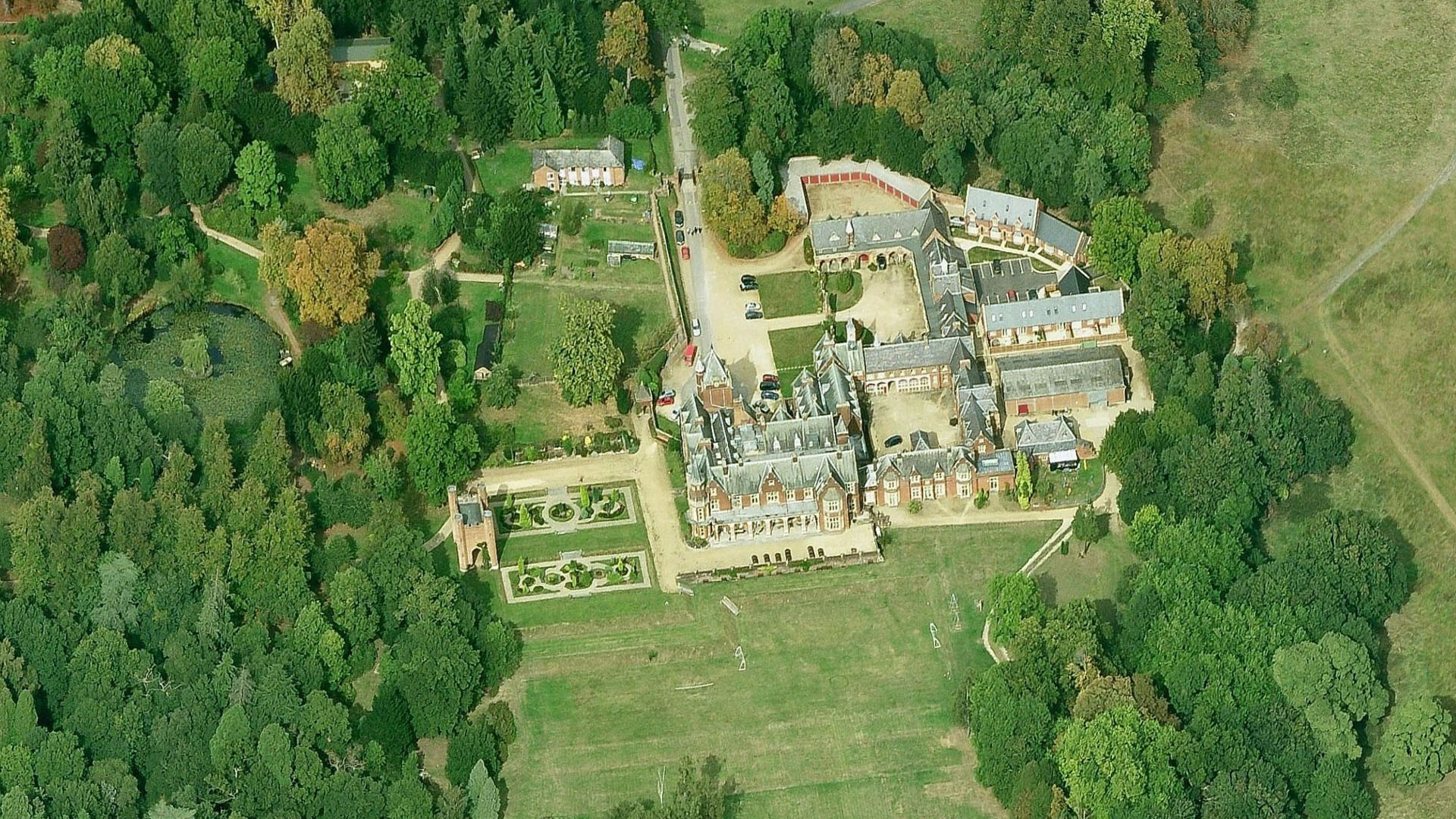 Bulstrode is a large park and mansion and lies on the western edge of Gerrards Cross adjacent to the A40. There is pedestrian access to the park from the end of Main Drive as well as Hedgerley Lane and from the house or mansion grounds.

The house is currently owned by WEC International (World-wide Evangelization Crusade Headquarters), a Christian evangelical mission agency. The park grounds are owned separately by a London based landowner/farmer.

Bulstode Park and house are grade II listed and registered by English Heritage for its special historic interest.

A park has existed at Bulstrode since the early Middle Ages, when its creation is said to have involved the diversion of a Roman road (Records of Bucks 20, 440). The name Bulstrode probably originates from the Anglo-Saxon words meaning 'the marsh belonging to the fort' (a reference to the nearby Iron Age hill fort). The Anglo-Saxon words for marsh and fort are: burh (marsh) and stród (fort).

The estate ownership has changed frequently over the centuries. In 1308 Bulstrode belonged to the Templars and was known as Temple Bulstrode Manor. In the early fourteenth century the trees provided an important source of income: fallen trees were cut up into tally sticks, which were used to keep a record of financial translations. In the first three months of 1308 the manor made a profit of nearly £11 producing and selling 7,600 tally sticks. There was also income from rents, the dovecote, the water mill and the sale of grain. But the largest sum in 1308-9 came from the sale of 157 cheeses and eight gallons of butter — that’s a lot of butter! There’s more on Templar cheese at Bulstrode here. The estate also produced 350 sheep’s fleeces and 56 lambs’ fleeces, but these were not sold: they were handed over to the king’s agent.

The Templars were then suppressed by the King and in 1337 the ownership of Bulstrode moved to the church and Burnham Abbey and later to Bisham Abbey until 1538 when it was sold and passed to private ownership.

In 1676 the estate was acquired by the infamously harsh 'Hanging' Judge Jeffreys, the Lord High Chancellor of England. He rebuilt the house c 1676-85 as an imposing red-brick building with a 70m long south front masking two courts separated by the hall of the previous manor house.  Judge Jeffreys was to die in 1689 while imprisoned in the Tower of London after James II had fled England and William of Orange's troops marched into London. The Jeffrey's family eventually sold the park in 1706 to Hans William Bentinck, a Dutchman, who had helped bring William of Orange to the English throne in the Revolution of 1688. Bentinck was given the title Earl of Portland for his services and William III is known to have visited Bulstrode house during his reign. Bentinck made Bulstrode one of his principal residences, he completed the wings of Jeffreys' house, and laid out surrounding formal gardens (Vitruviuus Britannicus IV, 1739), possibly with the assistance of Henry Wise and Claude Desgots. Sadly Bentinck died at Bulstrode in 1709.

In the 1740s, the architect and builder Stiff Leadbetter altered the house significantly for the 2nd Duke of Portland and a lake was added that is reminiscent of a Dutch canal.

Bulstrode was used by Margaret Bentinck, the wife of the 2nd Duke to house her natural history and antiquities collection, with the south-west side of the park used for live specimens (called Menagerie Wood today). The botanists Joseph Banks and Daniel Solander donated many exotic plants to the Dowager such that the gardens became famous for their varieties of flora. While the Bentnick family owned Bulstrode Mrs Mary Delany, a close friend of Margaret Bentinck, was invited to live there.

Mary was inspired by the plants and flowers found in the gardens and hot houses and invented a method of cutting paper mosaics to create floral pictures. These mosaics or collages were so good, so close to nature, that Sir Joseph Banks, Director of the Royal Botanic Gardens at Kew, said he could use her 'imitations of nature' for describing a plant botanically without fear of error. Mary Delany's mosaics were greatly admired by Queen Charlotte and they can still be seen today at the British Museum.

Between 1806-1809 the 3rd Duke of Portland undertook further re-modellings and additions to the house, including a castellated West Wing, to the designs of James Wyatt. Out of interest the 3rd Duke was a collector of marble and glass, and was influential in loaning the Roman Portland Vase to Josiah Wedgwood.

From 1793 the surrounding parkland was landscaped by Humphry Repton landscaped and he re-modeled the house gardens, assisted by Samuel Lapidge as contractor and William

Ireland as foreman. Repton wrote at some length about Bulstrode park in his Enquiry (1803), praising its beauty and using it as an example of how he recommended parks should be laid out.

The 4th Duke of Portland inherited the title in 1809 but he disposed of Bulstrode in 1811. The land then passed into the hands of the eleventh Duke of Somerset.

In 1860 the twelfth Duke, Edward Adolphus Seymour employed Benjamin Ferrey to reconstruct and enlarge the house, demolishing James Wyatt's west wing to leave the Keep a free-standing tower, and creating a formal garden over the cellars. The work on what is now the present mansion was completed in 1865.

After the death of the twelfth Duke the house passed to his daughter, Lady Helen Guendolen Ramsden and then to her son, Sir John Frecheville Ramsden (fifth Baronet) who would eventually lose his fortune. Sir John carried out extensive planting during the early C20, including a collection of rhododendrons.

Notable trees that can be seen today in the gardens at Bulstrode include the biggest Japanese cherry (Prunus Shirofugen) tree in Buckinghamshire. Other notable species are a Roble beech, Snowbell (Styrax japonica) and Chinese rain tree (Koelreuteria). The garden used to boast the largest Turkey oak (Quercus cerris) in Buckinghamshire, but sadly the tree fell in January 2010. The gardens today are full of colour from bluebells in the spring through azaleas, camellias and rhododendron to the wonderful autumn colours of a fine collection of maples.

Due to the financial problems in 1932, the estate was sold. Outlying buildings were sold and the house was unoccupied until World War II, when it was used for training by the RAF and WAAF (Women's Auxiliary Air Force). Out of interest Guy Gibson (of Dam Busters fame) attended a staff course at Bulstrode Park from the end of March to May 1944. Bulstrode was also used to teach WAAF Code and Cipher courses as early as 1940.

It was at this time that the main drive to the house as we see it today was constructed. Three earlier drives existed before the 1940s but these are now disused and lost in places; they are shown on Repton's map in his Enquiry, as well as on the OS maps published 1883, 1900 and 1926. These gave direct access from the north-west, Oxford direction, the north-east, London and Gerrards Cross direction, and south, Windsor direction. Lodges still exist at the north-west and north-east entrances on the A40, although they have been considerably enlarged.

After the War, Sir John used part of the property for chemical research into sisal by-products, then the property fell into disrepair.

After his Sir John's death in 1958, the park was sold to a farmer, and the mansion and woodland were bought by the Bruderhof community, who supported themselves with light industry. In 1966, the community moved to Kent, and the property was bought by WEC International,  who have gradually restored and improved the public parts of the house's interior.

The history of the house and a Guide to the gardens are available from the house's reception or bookshop in a booklet called 'Bulstrode, the home of WEC International'. Bulstrode house is open to the public on one weekend of the year in May or June. It may be possible to visit at other times, contact the site owners www.wecinternational.org.uk

Update 2016 - The house and grounds are currently up for sale.

Here are some pictures taken of the main hall and staircase at Bulstrode house around 1899: 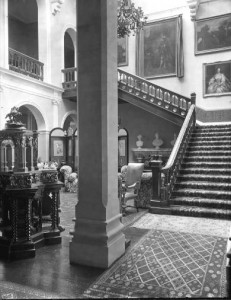 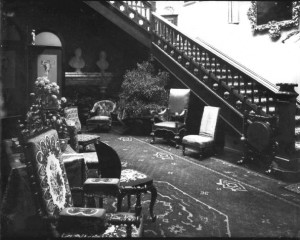 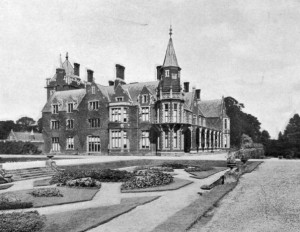 and some of the corridors: 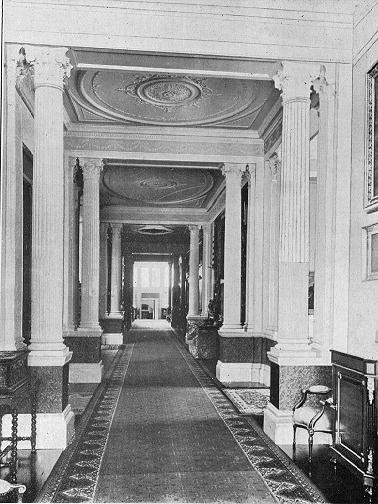 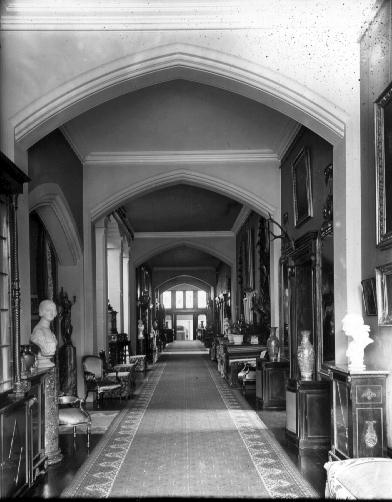 The park is dominated by a valley which surrounds the house on three sides. The park contains clumps and single trees, many probably planted during Repton's time, and is largely pasture. Among these are some magnificent ancient oaks which can be seen from the public footpaths that cross the park. A favourite old giant has such gnarled roots that the tree seems to be standing on a pedestal.

Repton's Enquiry shows and describes the pleasure drives through the park surrounding the Old Camp and Duke's Wood; drives now lost which formed a significant element of the designed landscape.

Below are some more views of the park....

The kitchen garden lies 700m south of the house, bounded to the south by the Hedgerley lane. Still largely enclosed by brick walls, it is now associated with private dwellings. Repton, in his Enquiry, shows the kitchen garden in the same position, with a similar layout to that depicted on early C20 OS maps. A further walled kitchen garden, standing close to the north front of the house, forms the west boundary of the forecourt, separating it from the informal garden to the west. It is enclosed by red-brick walls and is under cultivation, with a late C20 housing block to the north. The 1st edition OS map published 1883 shows that it was under cultivation at this time, although it is not defined on Repton's Enquiry map.

The Oxford Arms, (later to be called the Bull Inn) is featured on the Bulstrode Estate Map of 1686 and is believed to be the earliest recorded inn at Gerrards Cross. The crossroads of the Oxford Road/Bull Lane was an ideal position for an inn to capture trade of passing travellers. The turnpiking of the Oxford Road in 1719 increased the traffic and trade and this is reflected in the investment by the Duke of Portland to expand the inn in 1735. The Bull Inn never became a coaching inn as this trade was catered by Uxbridge and Beaconsfield (Hunt and Thorpe 2006).

The French Horn and The Packhorse

Apart from The Bull Inn there were a couple of inns catering for travellers along the Oxford Road one of which was the French Horn (formerly called the White House), which is mentioned in a 1743 rental agreement from the Duke of Portland (Hunt and Thorpe 2006). The Packhorse Inn dates from 1707 when Thomas Pyner purchased land from the Orchehill Estate to set up a beerhouse. The Packhorse became very popular with the Old Berkeley Hunt in the late 18th century who based their headquarters and kennels at the back of the Inn.