Bulstrode Camp is surrounded by trees, some of them very old oak trees. Even in 1847 they were noted as being old by George Lipscomb in his History and Antiquities of the County of Buckingham volume VIII; in which he wrote:
“On a hill south-east of the House, there is a very large circular entrenchment with some large old oaks growing on its banks.” 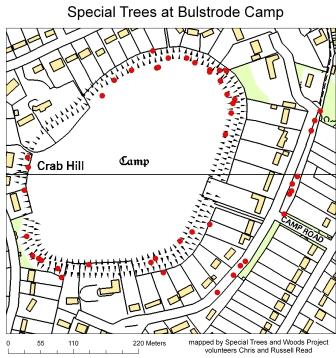 These oak trees could probably be better described now as ancient and are inevitably in various stages of decline. Some have already died leaving only dramatically bare skeletons to tell of their former glory whilst others are remarkably healthy and sending out promising new growth. More than 40 of them have now been recorded using a GPS system by volunteers Chris and Russell Read and are marked on the adjacent map.

The largest tree has a girth of more than 6 metres. This one and some of the other ancient oaks date back at least to the late 17th century when the Bulstrode estate was laid out – probably even earlier than that. Clearly many of them were showing signs of collapse and hollowing around 1900 when brickwork was inserted to support them. In some cases the trees have grown over and round these brick infills and in others the brickwork has fallen out but the trees have survived regardless.

This shows why this form of tree preservation is no longer used by arboriculturalists.

There are more huge old trees in Bulstrode park and along Camp Road which runs around the perimeter of the Camp.